"Ten artists arrived to enjoy a flawless autumn day. There was a very welcoming sign at the kiosk, and Nancy took my photo with it. I set up by the White Barn, a high traffic area, and I had lots of young artists stop by with their families.  One little girl was astonished when I opened my brush case with so many brushes.  I showed her how I used a flat brush to apply the paint with a straight edge at the roof line.  I was delighted that every single young person who stopped by said they were an artist and told me what kind of art they liked to make or what material they liked to use

After lunch and a quick critique of our artwork by Karen Druker, several of us took the house tour, led by Emma, a member of the Hidden Villa staff.  She started the tour on the bridge leading to the house.  She took us around the back, and we entered through the servants' entrance and into the kitchen.  I was astonished to see how large the house is at the back. It is the bedroom wing and it runs perpendicular to main living areas that we toured first on Thursday.  Emma told us that the house has 10 bedrooms, and that the Duvenecks liked to have house guests, so all the bedrooms were usually occupied."  Marilyn

From our hosts:
We are thrilled to be hosting the Plein Air Painting Group from the Santa Clara Valley Watercolor Society today.  Feel free to quietly observe these talented artists as they carry on a fine Hidden Villa tradition in various locations around the farm.

What is Plein Air Painting?

Artists have painted outdoors since the origins of art, but working in natural light gained international recognition in the mid-19th century as it was taken on by the Hudson River School, Barbizon School, and Impressionist painters like Claude Monet and Camille Pissarro.  Plein Air painting translates from the French language to "open [in full] air".  This painting style focuses on each painter's acute observations of minute moments in the natural world.  Today, the Santa Clara Valley Watercolor Society carries on this art form at the farm which you are about to explore for yourself.  Have fun!

Frank Duveneck Sr. was born in Covington, Kentucky in the year 1848.  Frank began his painting career in churches at a young age, and pursued this passion by studying at the Royal Academy of Munich, Germany.

While his paintings were mostly ignored in his Kentucky hometown, they attracted a great deal of national attention through shows with the Boston Art Club around 1875.  By the age of 27, Frank was a celebrated artist, once called "the unsuspected genius" by Henry James.

Frank Sr. went on to open multiple art schools in the village of Polling in Bavaria, as well as Munich, where his career took flight.  His students (known as the "Duveneck Boys"), included John Twachtman, Otto Bacher, Julius Rolschoven, and John White Alexander.  Frank's paintings decorate the Duveneck House on Hidden Villa's property to this day.

There were 10 artists, 1 guest ( we found Jane Saltman hiding in the garden after lunch and after starting to leave the site). Even though we had a small group, each one of them was bubbling with energy and came to the paint out with an aim of making it special! I didn't see a single piece of small paper, everyone drew bigger and better! The farm had a special light, which was bewitching. The cool air did make a head hat a must have but didn't freeze the painters' fingers. Next time, I might think of going later in the day with a sketch pad to rapid sketch the farm animals.

Marilyn (Thursday Paintsites co-coordinator) and Uma (Saturday Paintsites coordinator) arranged with Maggie at Hidden Villa for the Santa Clara Valley Watercolor Society plein air groups to paint and interact with school and family groups for two special paintouts.    We were rewarded for their efforts with a particularly fine turnout on a particularly fine November day during which we did the following:  Welcomed three new members of the Watercolor Society and two guests to their first Thursday Paintsites paintout; Painted the White Barn (as opposed to the Tin Barn), the White House, the Duveneck House, the greenhouse, the blacksmith shed and various bits of farm equipment; Entertained and were entertained by the many delightful school groups; Listened attentively when the docents were introducing the children to the various farm animals; Had a long & sociable lunch before our show-and-share critique; Got a guided tour of the Duveneck House; and finally Effected a group rescue of a small bird that was trapped in some bird netting --- not only are we good artists, we (at least Jane, Laurie and Katherine) are good people as well.

For more information about Hidden Villa, see:
http://www.hiddenvilla.org/
For information about Josephine and Frank Duveneck and their remarkable lives and contributions to the Santa Clara Valley, see:
http://www.losaltoshillshistory.org/Resources/DuveneckHouse/Duveneck-family-Part1.html
http://www.losaltoshillshistory.org/Resources/DuveneckHouse/Duveneck-family-Part2.html

Upcoming Paintsites:
For details, see the SCVWS website or the November and December Newsletters.
Note:   Save Saturday, January 16, 2016, on your calendars for the Annual Holiday Party.   Details and the sign-up form will soon be posted on the SCVWS website.   Everyone is welcome to display their 2015 plein air paintings (not just those done at Paintsites events) on the stage.

The White Barn:   Hands down the most popular subject... 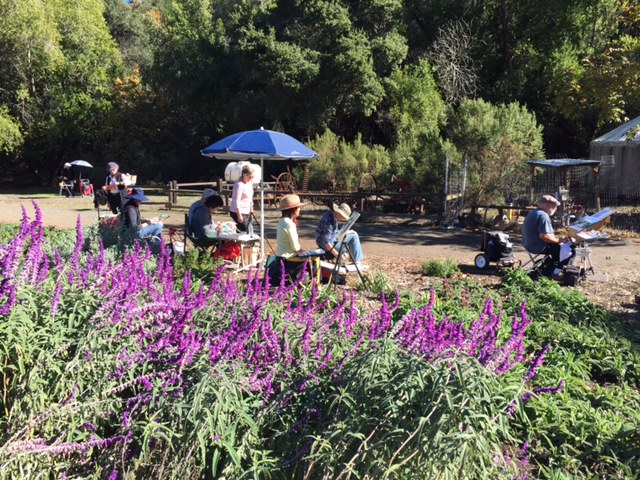 
The Greenhouse:   Not in the best of repair, it was still an interesting subject with an added bonus of some attractive fall foliage framing it.

I thought this would be quick and easy until I realized the glass walls and roof made the interior structure and trees on the opposite side of the building important elements of the painting.   At which time it became neither quick nor easy.    Brad